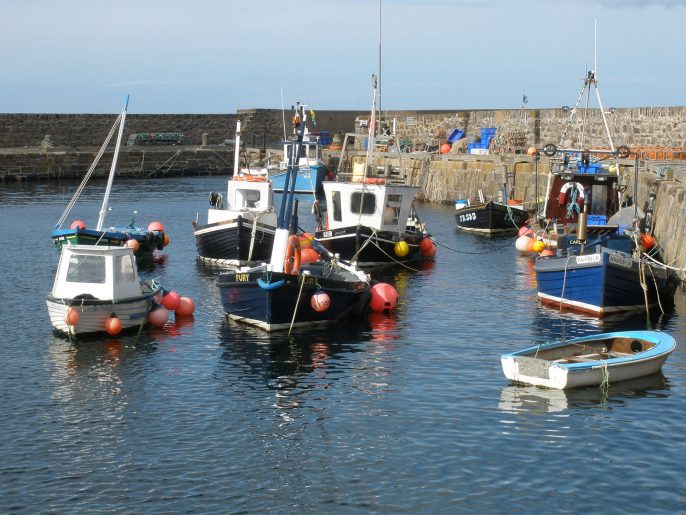 One of the oldest seaports in Scotland, Rosehearty at one time had a fishing fleet which supported 600 people. Extending to 3400m², this is a one basin harbour which offers 120m of quayside inside the harbour with a further 120m on the outer breakwater, but this is exposed to winds from between the east and north east.
Around 20 boats, mostly involved in part time fishing regularly use the harbour.

The harbour virtually dries out at low tide, restricting accessibility, but the breakwater, though exposed, can be used at all states of the tide.

Vessels entering the harbour should keep the black and white leading poles in line until 30m from the point of the West Pier then, keeping the poles to port, enter midway between the West Pier and the line of the leading poles. Two green flashing lights on the poles and a flashing white light on the end of the west pier operate at night.

The harbour should not be approached in onshore winds.

The adjacent Port Rae should not be entered without local knowledge because of unmarked rocks.
The slipway may be used for launching or recovery apart from 1 to 2 hours either side of low water depending on tidal flow.

Slipway users should use the car park for trailers and car parking. No parking is allowed on the grass.